Since the very first observation of fluorescence was reported by Sir Frederik William Herschel in 1845, and its first actual description presented by British scientist Sir George G. Stokes in 1852, its use in microscopy has played an extremely important role in biological discovery. Scientists can see and analyze cells; from the results, they’ve been able to discover organisms and previously unknown life, as well as study and ultimately combat disease. Fluorescence microscopy has allowed scientists and engineers to make some of the most significant biological finds to date. 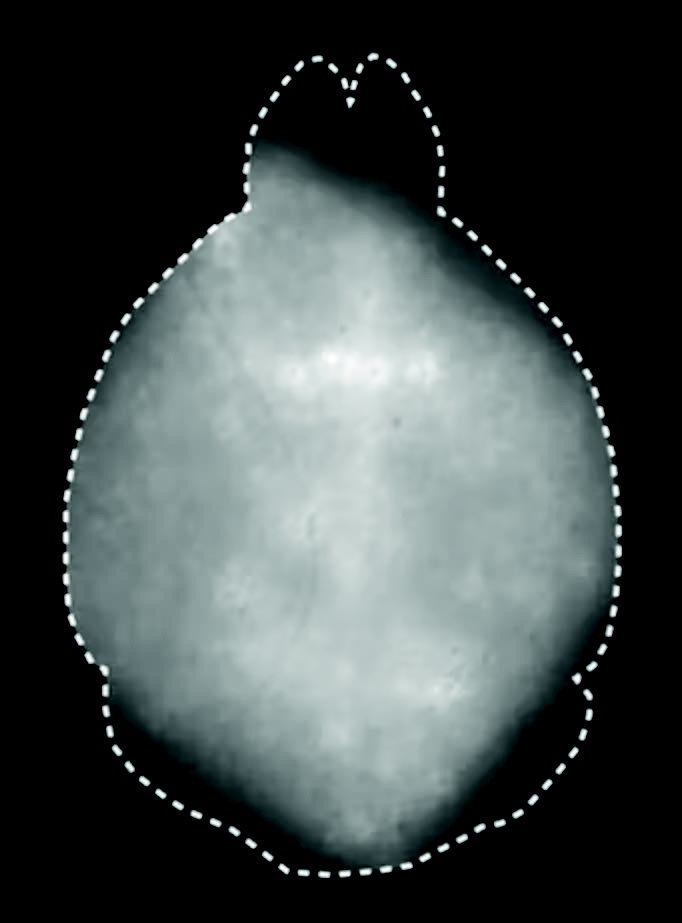 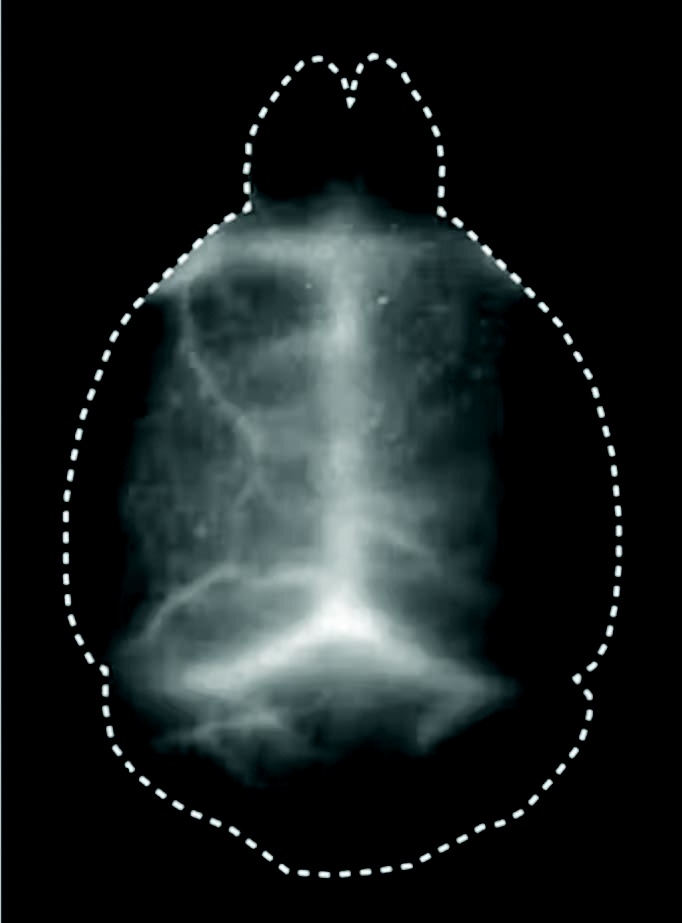 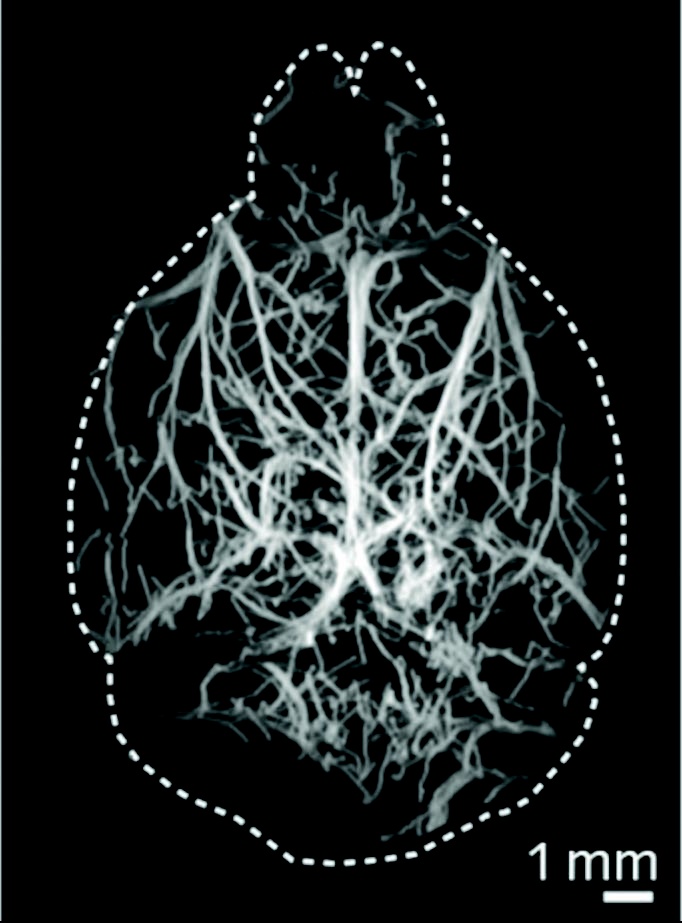 However, despite its effectiveness, the method has had limitations since its earliest use—shallow penetration depths into samples and cells’ sensitivity to phototoxicity, among them. And while it has evolved exponentially over the past century, some restraints have remained.

“Mammalian tissues are naturally opaque, which hinders optical imaging techniques from attaining high-resolution imagery,” says Quanyu Zhou, a researcher at the Institute for Biomedical Engineering and Institute of Pharmacology and Toxicology at the University of Zurich and the Institute for Biomedical Engineering at ETH Zurich, both in Switzerland, and a member of Daniel Razansky’s Lab.

To access deep brain regions, conventional optical microscopy techniques opt for highly invasive surgical methods. Often used to image molecular and cellular details of the brain in animal models of various diseases, fluorescence microscopy has been limited to small volumes and highly invasive procedures such as craniotomy due to intense light scattering by the skin and skull.

According to a study led by Zhou and Razansky, a professor of biomedical imaging, the effective penetration depth and resolving capacity provided by fluorescence microscopy have been limited, thanks to intense light scattering in living tissues.1 They note that while shortwave-infrared (SWIR) cameras and contrast agents featuring fluorescence emission in the second near-infrared (NIR-II) window have expanded the achievable penetration, “the effective spatial resolution progressively deteriorates with depth due to photon diffusion.”

“The penetration depth of optical microscopy is still fundamentally limited by the so-called ballistic regime (typically <1 mm from the surface),” according to Zhou and Razansky, adding that “enabling high-resolution optical observations in deep tissue represents a long-standing goal in the biomedical imaging field.”

Fig. 4 - Noninvasive cerebrovascular mapping in mice with DOLI. (a) WF image of the mouse head through the intact scalp after fluorescent dye perfu-sion. (b) Corresponding DOLI image formed from the image stacks acquired after the microdroplet injection. (c) DOLI image of approximately the same ROI acquired after scalp removal. (d) Combined microvascular map of the brain and scalp by superimposing DOLI images with and without scalp. 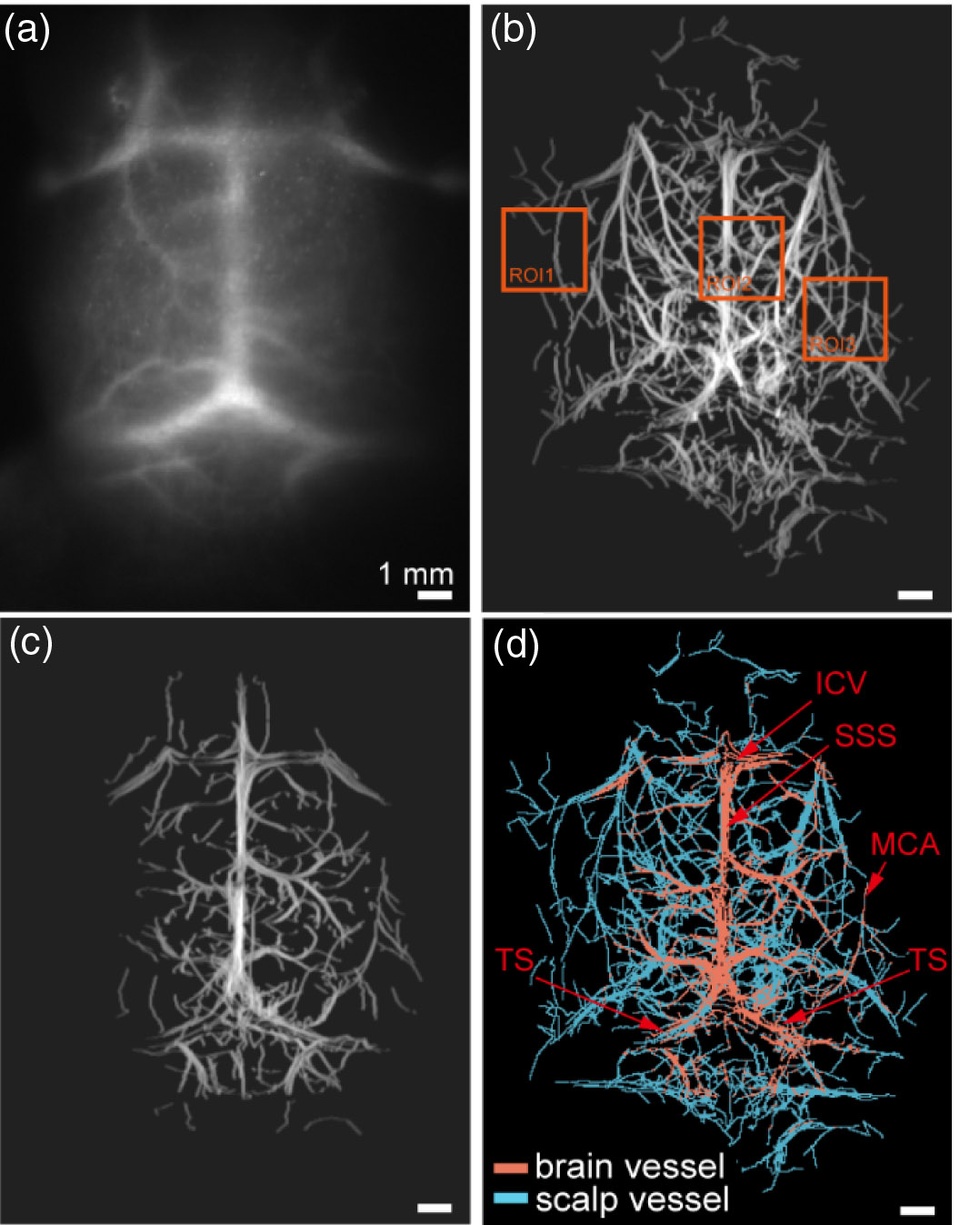 Their team is advancing toward this goal with a new technique—diffuse optical localization imaging (DOLI)—that allows microscopic fluorescence imaging at 4X the depth limit imposed by light diffusion. This is making it a promising platform for studying neural activity, as well as microcirculation, neurovascular coupling, and neurodegeneration. According to their research, the method is based on “localization of flowing microdroplets encapsulating lead sulfide (PbS)-based quantum dots in a sequence of epifluorescence images acquired in the NIR-II spectral window.”

Razansky’s lab specializes in development of new multiscale functional and molecular imaging techniques, with a major focus on noninvasive brain imaging. According to Razansky, right now most murine brain studies with optical microscopy are limited to small brain regions and rely on highly invasive procedures.

“The introduction of highly efficient [SWIR] cameras and bright quantum dots in the NIR-II spectral window enabled us to image deep brain regions noninvasively, while the spatial resolution was further improved by introducing on the localization concept,” he says.

The group’s goal in their recent research has been to image even deeper into the brain, for an even better and more comprehensive study of it. Visualizing biological processes deep in the intact living brain is crucial for understanding both its cognitive functions and neurodegenerative diseases such as Alzheimer’s and Parkinson’s. The researchers say that with their new DOLI method, they have been able to clearly visualize the microvasculature and blood circulation deep in the mouse brain entirely noninvasively for the first time. This ultimately enables a closer look at a living, functioning brain.

“DOLI’s superb resolution for deep-tissue optical observations can provide functional insights into the brain,” Zhou says. “We believe with the collective efforts on more efficient [SWIR] cameras, as well as novel contrast agents exhibiting strong fluorescence responses in the NIR-II window, many unknown questions in these fields can be answered in the near future.”