Protects the livelihood of 65 Rochestarians and their families, helps the manufacturer continue to grow

WASHINGTON, DC — Congresswoman Louise M. Slaughter (NY-25) joined Navitar CEO Julian Goldstein at the manufacturer’s headquarters today to announce a major victory over Chinese counterfeiters. For the last several years, Navitar has been threatened by counterfeiters in China who were ripping off its products and putting the livelihood of 65 Rochestarians and their families at risk. With Slaughter’s help, Navitar recently secured a series of legal victories that cracked down on this illegal activity, helping the local manufacturer continue to grow. 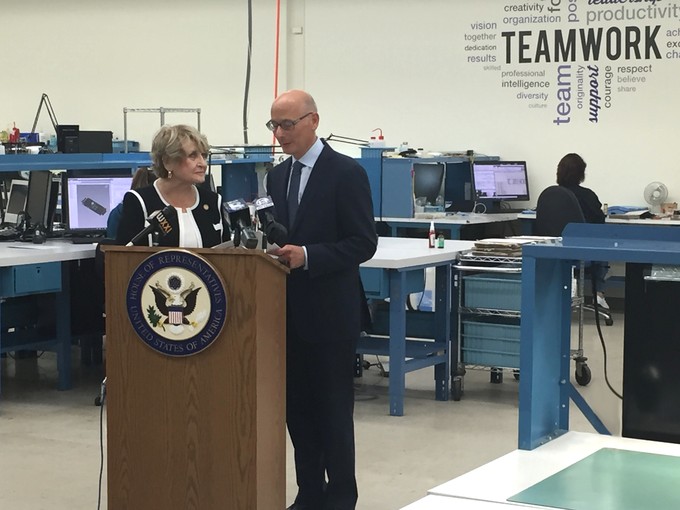 “For all the misguided talk about how we don’t win anymore, a manufacturer right here in Rochester has won an important global fight. I’m proud to have helped Navitar stand up to criminals half a world away to protect Rochester jobs and the world-class optical equipment that is produced right here in our community. The counterfeiters who were ripping off Navitar’s good name are the same type of threat that many of our businesses face every single day when dealing with countries like China. That’s why I will continue to help our local manufacturers compete on the world’s stage while opposing bad trade deals like the Trans-Pacific Partnership, which would ship good jobs overseas and threaten the livelihood of families throughout Monroe County,” said Slaughter.

“American manufacturers must work hard to safeguard their intellectual property and that is exactly what Navitar has been doing for the last three years. On behalf of our 65 Rochester employees and their families, we want to thank Congresswoman Louise Slaughter for working to solve these problems and being with us every step of the way through any obstacles,” said Navitar CEO Julian Goldstein. “We also want to thank officials from the International Trade Administration for their help. The doors are now open once again for our legitimate Chinese dealers and sellers abroad to compete and prosper. We are proud to announce our Rochester-made exports to China have doubled this year and our local workforce continues to expand.”

Navitar designs, develops, and manufactures optical equipment for clients and companies around the world. Several years ago, counterfeiters in China began ripping off the company’s name, labeling substandard Chinese-made optical equipment as being made by Navitar. This illegal activity threatened the growth of Navitar and the jobs of 65 Rochestarians.

After being contacted by Goldstein, Slaughter worked with the team at Navitar to crack down on this illegal activity and protect these jobs. Slaughter connected Goldstein with experts from the U.S. Department of Commerce, the International Trade Administration, and the U.S. Embassy in Beijing, who helped Navitar develop a winning legal strategy to hold these counterfeiters accountable.

As these cases worked their way through the Chinese legal system, Slaughter continued to help officials from Navitar cut through red tape and get the assistance they needed to succeed. As a result, Navitar has won five lawsuits against Chinese companies for false advertising and two additional lawsuits for smuggling and tax evasion, respectively. Following these victories, Navitar exports to China have doubled over the last year and its workforce continues to grow.

Slaughter has worked tirelessly to help Rochester manufacturers like Navitar while defending them from unfair competition overseas. In March, she led a bipartisan effort with members New York congressional delegation urging President Obama to oppose the Trans-Pacific Partnership (TPP).

The TPP is a 12-country megadeal modeled after the job-killing North American Free Trade Agreement (NAFTA) that has been negotiated in secret. The trade agreement would give foreign companies increased access to the lucrative American market, forcing U.S. workers to compete with countries such as Vietnam, where the minimum wage is less than 65 cents an hour and workers’ rights are almost nonexistent.