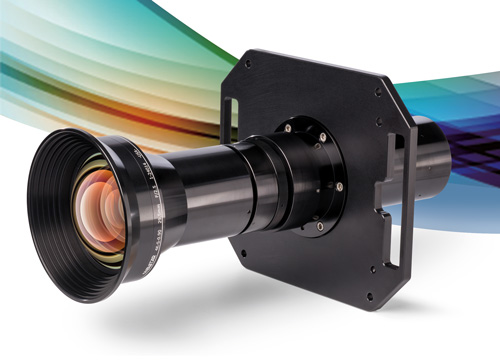 ROCHESTER, NY — April 29, 2014 —Navitar, a global leader in optical technology, continues to strengthen its position in the 4K projection arena by collaborating with projector manufacturer, Sony Corporation, to develop a 0.90:1 wide angle lens exclusively for the SRX-T615 4K digital projector for industrial, visualization and simulation applications. While Navitar has designed many custom lenses for the 4K projection space, this is the first lens for wide angle flat screen 4K applications developed for distribution as part of a projector manufacturer’s prime lens line-up.

Navitar will sell the lens direct to system integrators and users. In addition, Sony will list the lens as a projector accessory in its SRX-T615 product literature and webpage listing Navitar as the vendor. The projector’s 4K resolution, color accuracy, uniformity and contrast make it ideal for a variety of applications, including visualization (C4ISR - Command, Control, Communications, Computers, Intelligence, Surveillance and Reconnaissance), simulation (entertainment), auditorium (museums, education, and planetarium) and production (broadcasting).